The Geologic Park is found at a folded structure, the Syncline of San Román-Santillana, that affects materials from the Late Cretaceous and the Paleogene. A fairly comprehensive register of this time period is found here.

The Geology of the Park

Costa Quebrada is an exceptional setting to enjoy and understand the rich geological substratum contained in it. A large fold, the syncline of San Román-Santillana, stretches southwest from the peninsula of Santander and shows the magnitude of the forces that shape the planet. These forces even tilt rock strata to a vertical position in the northern side of the syncline.

The rock layers hold valuable information that allows to reconstruct an over 100-million-year geological history. The past environments in which rocks deposited and hardened, as well as the folding and uplifting processes caused by the movement of tectonic plates, are illustrated in a clear manner.

Marine erosion, together with the complentary action of rainwater and overland flow, streamflow and subsurface flow (in the form of rivers, torrents and subterranean streams), creates a unique geological landscape. The substratum fully opens up at the cliffs and the wave-cut platforms, carved by the action of waves. There it shows us every geological secret that this unique area hides.

If you would like to know the main highlights in the Park, please visit the SITES OF GEOLOGICAL INTEREST MAP.

THE EVOLUTION OF THE LANDFORMS

Costa Quebrada exhibits an extremely rich and appealing string of coastal forms in a short stretch, but it also shows the patterns of coastal erosion very clearly, thus making possible to reconstruct the evolution of this coastal ensemble over time. 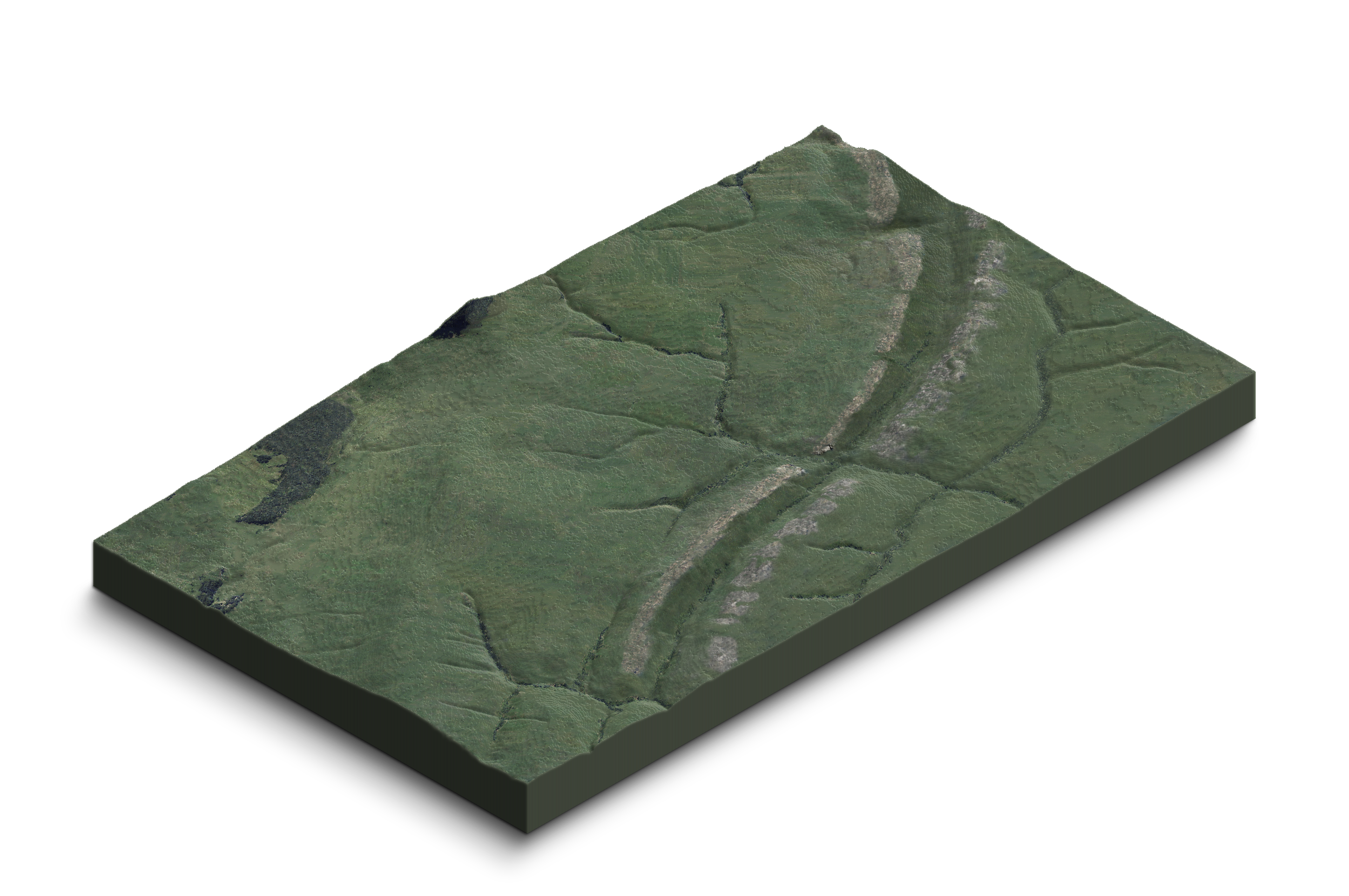 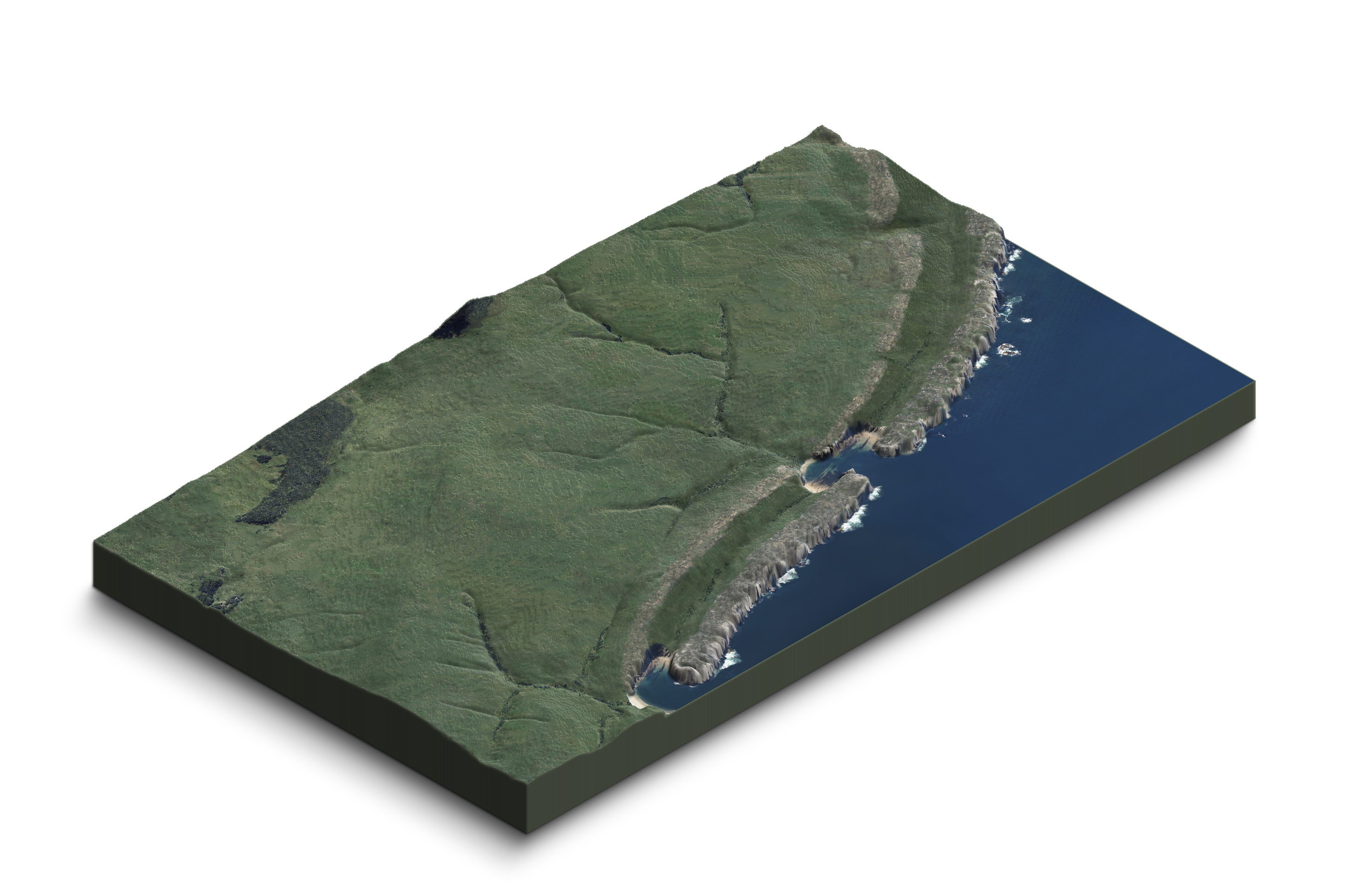 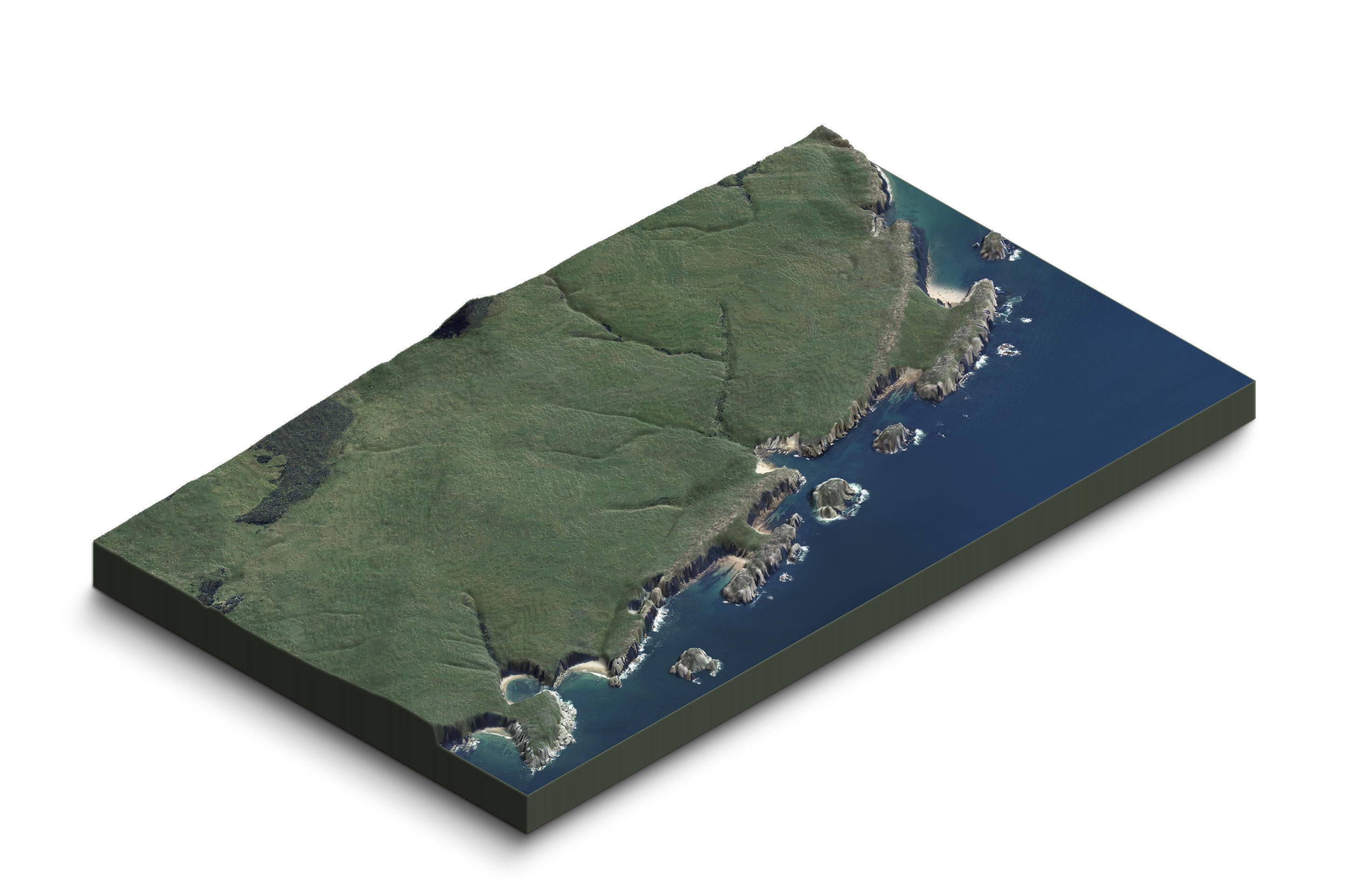 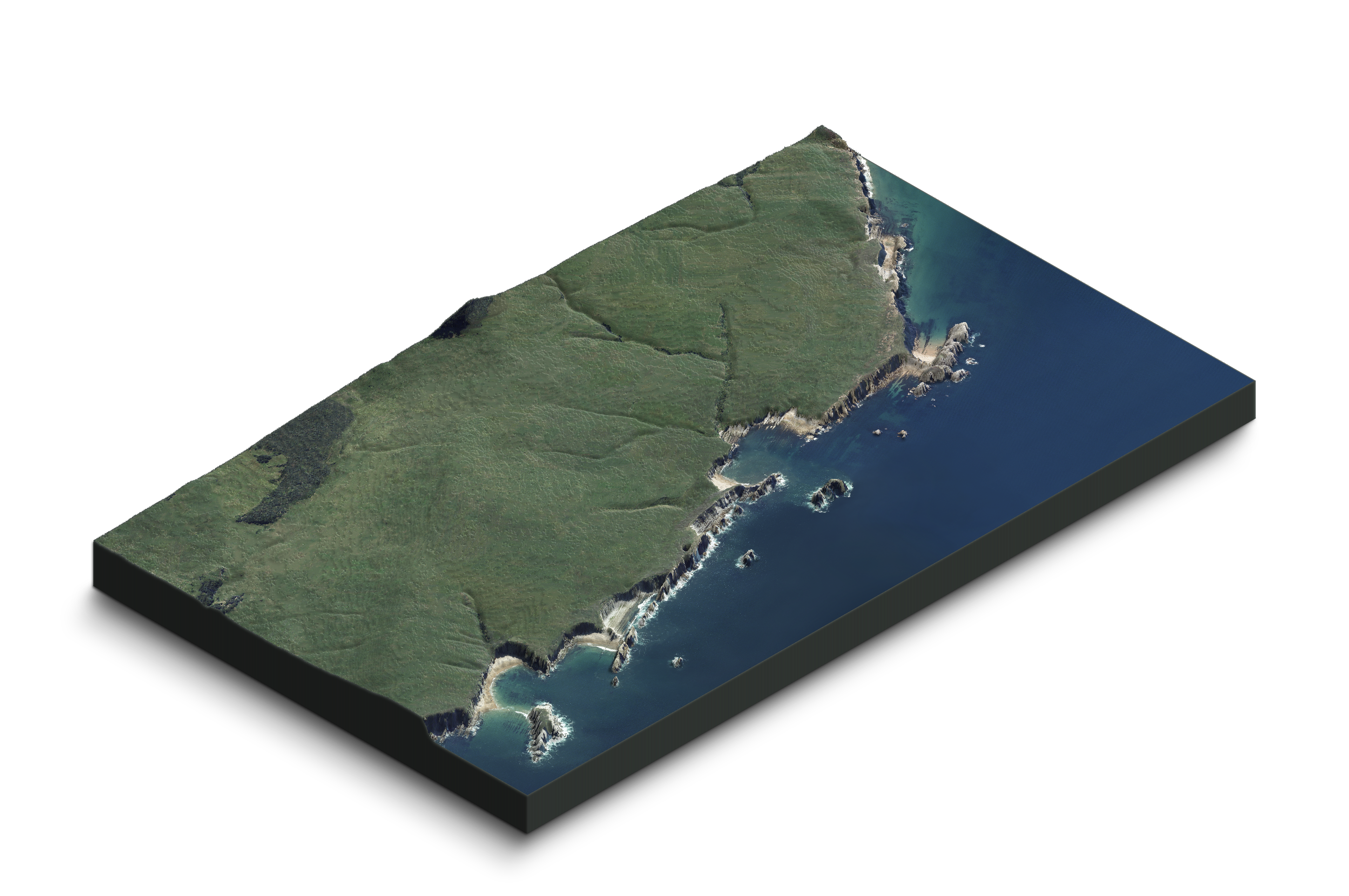 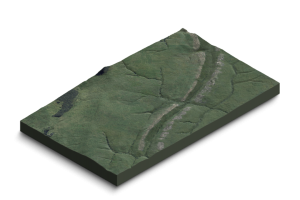 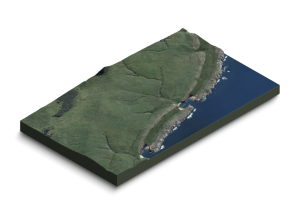 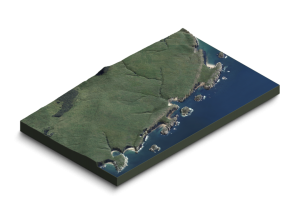 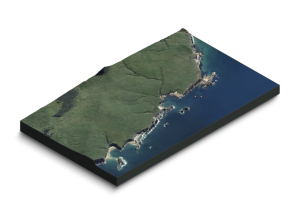 During an ice age the sea retreats back several miles, exposing a wide coastal plain that is shaped by the running waters.

Two long limestone ridges cross the land acting as barriers. Rivers only can go across them along the faults that fracture these barriers.

2. The arrival of the sea

The sea level rise that follows the ice age floods the coastal plains. Wave action wears away the weak rocks, and erosion moves forward until the first resistant limestone ridge slows the process down.

The waves make their way through gaps carved along faults, and quickly erode the soft sandstones and clays, starting to shape arched inlets.

Weak rocks, such as sandstones, siltstones and marls, are only preserved where resistant limestone ridges shelter them. The first ridge is slowly worn away by the wave action.

Erosion slows down again when waves reach the second limestone ridge, but waves start carving the soft marls behind it. Wherever erosion advances, arch-shaped inlets and sand beaches are formed.

Erosion continues dismantling the resistant limestones in the first ridge, almost reduced to small islets and stacks (locally named Urros) in this stage.

When, 120 million years ago, the first Cretaceous materials of Costa Quebrada were first deposited, they were in the warm and clean water of the Tethys Sea. Meanwhile, reptiles dominated the living world in the far-off emerged lands. However, large reefs were developed here under the clean water, made up of certain molluscs, the rudists, and some corals.

As these reefs became larger, voluminous masses of Aptian Cretaceous limestone rock were formed. Nowadays, once emerged, they arise as significant rock masses along the La Marina and the limestone massifs east of the river Miera. Their mining potential has always been of great interest in Cantabria. This is confirmed by the mining activity carried out at Cabárceno, Reocín, Puerto Calderón, and the countless quarries of Camargo and Eastern Cantabria.

But nothing lasts forever in the long history of our planet and, after five million years, the placid waters were disturbed by a change in rainfall patterns and the sea level.

During the Albian, 112 million years ago, sediments transported by the rivers coming from the south and the west buried the rudists and corals and thus hindered their survival here. Initially, only the finest sediments (silt and clay) arrived. They were loaded with plant debris, wood from forests and small resin fragments. Ancient insects have been found in some of these resin fragments (amber), elsewhere in the basin.

The siltstones and sandstones found today at the isthmus of Somocueva were formed this way. They can be found along the central coastline of Cantabria, too, from Suances to Comillas and the inner valley of the river Nansa.

These silt / sand cycles were not exactly alike. Over time, each new sand deposit contained more calcium. Consequently, the sand deposit would gradually become a new limestone deposit, where the many marine organisms that died would remain, trapped and fossilised. Ammonites, sea urchins, sea snails, corals, sponges, and many other organisms were part of rich marine communities.

The limestone sank slowly into the basin until the deposition stopped. Furthermore, the quantity of dissolved oxygen in the sea experienced a substantial decrease at the end of this process, which led to an important mass extinction of marine species.

This way, a layer of ochre coloured limestones originated, the same renowned Cenomanian limestones that our ancestors used to paint their beliefs and their world in Altamira.

The inert reef, which was now deep in the waters of a colder, poorer sea, was then buried by new sediments. The almost lifeless clays burst onto the scene.

As they were being deposited, the climate didn’t remain the same. Periods of tens or hundreds of thousands of years of warm, humid weather were followed by long periods of cold, dry weather. These fluctuations determined the type of sediments that would reach the basin.

During long years, copious rainfalls would load the basin with clays, whereas in other times, clays were less abundant and shell and calcium-rich debris deposition would predominate.  This calcium cemented the clays when it was most abundant, originating more resistant alternating layers. Irregular sea urchins, corals, sponges, ammonites, bryozoans and many other organisms lived in this environment.

This cyclic process took place countless times from the Turonian to the Santonian, creating the series of thin layers of marlstone and gray limestone found along the cliffs of eastern Costa Quebrada.

From the Maastrichtian onwards, about 70 million years ago, this little basin began to rise, slowly. Consequently, sands gradually became present again, along with the influence of currents. The sandy limestones found between Covachos and San Juan de La Canal were deposited in this environment.

This was the case until the end of the Mesozoic, 65 million years ago. With the mass extinction that put an end to the dominance of large reptiles, many other creatures also became extinct. At that time, sandy materials became exposed to the elements, in the middle of some coastal brackish lagoons. Certain very soluble rocks were deposited there-the dolomites of the cove of La Canal.

The coastal environment of the sandy deposits, constantly movilised by currents and waves, fostered the formation of the most recent materials of Costa Quebrada-the calcarenites and limestones found near the island of Virgen del Mar. Numerous sea urchins, annelids and sponges lived in this hectic environment.

Already at that time, the collision between the African and the European continents began. The Iberian island was compressed against Europe, causing the uplift of all the mountain ranges in southern Europe: the Cantabrian Range, the Pyrenees, the Alps, the Balkans and the Carpathians.

This graphic shows the materials of the outcrop of Costa Quebrada. Age (millions of years, m.y.) and rock composition are indicated.  The two boundaries, Cenomanian-Turonian (C-T) and Cretaceous-Paleogene (K-Pg, former K-T) are also shown, given their connection with biological extinctions.

The geological landscape of Costa Quebrada originated in three stages, completing a geologic cycle. The sediments that originated the current rocks of the Park were the result of the erosion of older materials, the same way that the sediments produced by current erosion will constitute the rocks of the future.

The action of the sea is the main cause of the erosion processes that originate this landscape. As these materials undergo folding and uplift, different sea levels created different platform levels.

Marine erosion of an abrasion platform

Marine erosion of a new platform

Marine erosion of a third platform

The Rocks in the Park

The long geological history of Costa Quebrada, as well as the different events that took place here, originated a certain diversity of sedimentary rock materials, packed in a series of clearly differentiated formations.

Each of these formations is a chapter of the vast book that tells us the history of our Earth . The information that helps us complete this story can be extracted from its pages.

The different types of rocks found at the Geologic Park are listed below, in increasing order of age.

They are the most modern consolidated materials in Costa Quebrada. It has an approximate thickness of 150 metres, and it is made up of calcarenites with several alternating marl strata. It contains abundant fossil fauna, including echinoids and sponges.

Around 100 metres thick, it is made up of calcarenites and sandy limestones. Several nummulite limestone strata are found, as well as strata with sponge fossils in the form of chert nodules.

It is around 20 metres thick. These Thanetian materials are made up of compact limestones with very soluble, often karstified algae fossils, and intercalating glauconite-rich marlstone.

Around 70 metres thick, these are the first materials of the Paleogene. They are microcrystalline dolomites, which are very soluble and affected by surface dissolution, and biopelmicrite calcarenites.

These are the last Mesozoic materials, 160 metres thick. The different limestone strata in this formation gradually increase their content in sands, including abundant sandy and conglomerate lenses.

It is around 200 metres thick, and it is made up of siliciclastic calciturbidites, on top of which marl-limestone rhythmites, nodular calcarenites and nodular limestones are deposited, due to the activity of the organisms that produce Thalassinoides.

It is around 400 metres thick. These materials are made up of marl-limestone rythmites, which are in turn made up of galuconite-rich argillaceous marls and calciturbidites. Fossil fauna is present in certain places, basically consisting of echinoids and ammonoids.

Around 120 metres thick, it is essentially made up of sandy limestones. It binds together materials from a pure limestone upper member and a lower member consisting of alternating flat-cleaving limestones and marl strata. In the upper part there is an interesting hardground.

It is about 100 metres thick, and it is the result of the deposition of coastal progradant detrital facies cycles. Carbonaceous siltstone strata alternate with abundant carbonaceous and sulphur traces, as well a cross-lamination sandstone.

It is 200 metres thick. It is made up of rudist reef micritic limestone and hosts secondary processes of zinc-lead dolomitisation and mineralisation. Rudists and corals can often be observed.

This website uses cookies to improve your experience while you navigate through the website. Out of these, the cookies that are categorized as necessary are stored on your browser as they are essential for the working of basic functionalities of the website. We also use third-party cookies that help us analyze and understand how you use this website. These cookies will be stored in your browser only with your consent. You also have the option to opt-out of these cookies. But opting out of some of these cookies may affect your browsing experience.
SAVE & ACCEPT